On April 9, 2022, I joined a bunch of people for the inauguration of the rejuvenation of two water bodies in Kolar district of Karnataka. This is a field-visit report.

Under the rejuvenation project, the identified waterbodies like lakes and ponds are taken up for desilting. There are several benefits of this such as the removal of silt helps in increasing storage capacity and groundwater recharge thereby improving the availability of water. The excavated silt gets used for several purposes such as agriculture, plot leveling, bund making or road construction. The project that we are involved in is a collaboration of several NGOs, CSR partners and governments. Avni is used to monitor the operations. Offline app is used by field partners to capture the work done and reports and analytics helps project management team and donors to review the progress and make key decisions. The first version of this project done in 2019 under the Maharashtra government has since then been replicated in selected districts of several states. Today, this project is being carried out in three different states in India. One of these states is Karnataka, and one of the lakes being rejuvenated is near Mulbagal, Kolar, Karnataka. This is the setting of my field visit.

Why are lakes important in Kolar district? Rainfed man-made lakes/water tanks are the primary mechanism of water storage in Kolar. People call Kolar "ಕೆರೆಗಳ ನಾಡು" (Keregaḷa nāḍu - the land of lakes). One look at the map of Kolar will tell you why. These tanks were built a few hundred years ago. Today, while water in the lakes are not directly used, it helps build the water table. 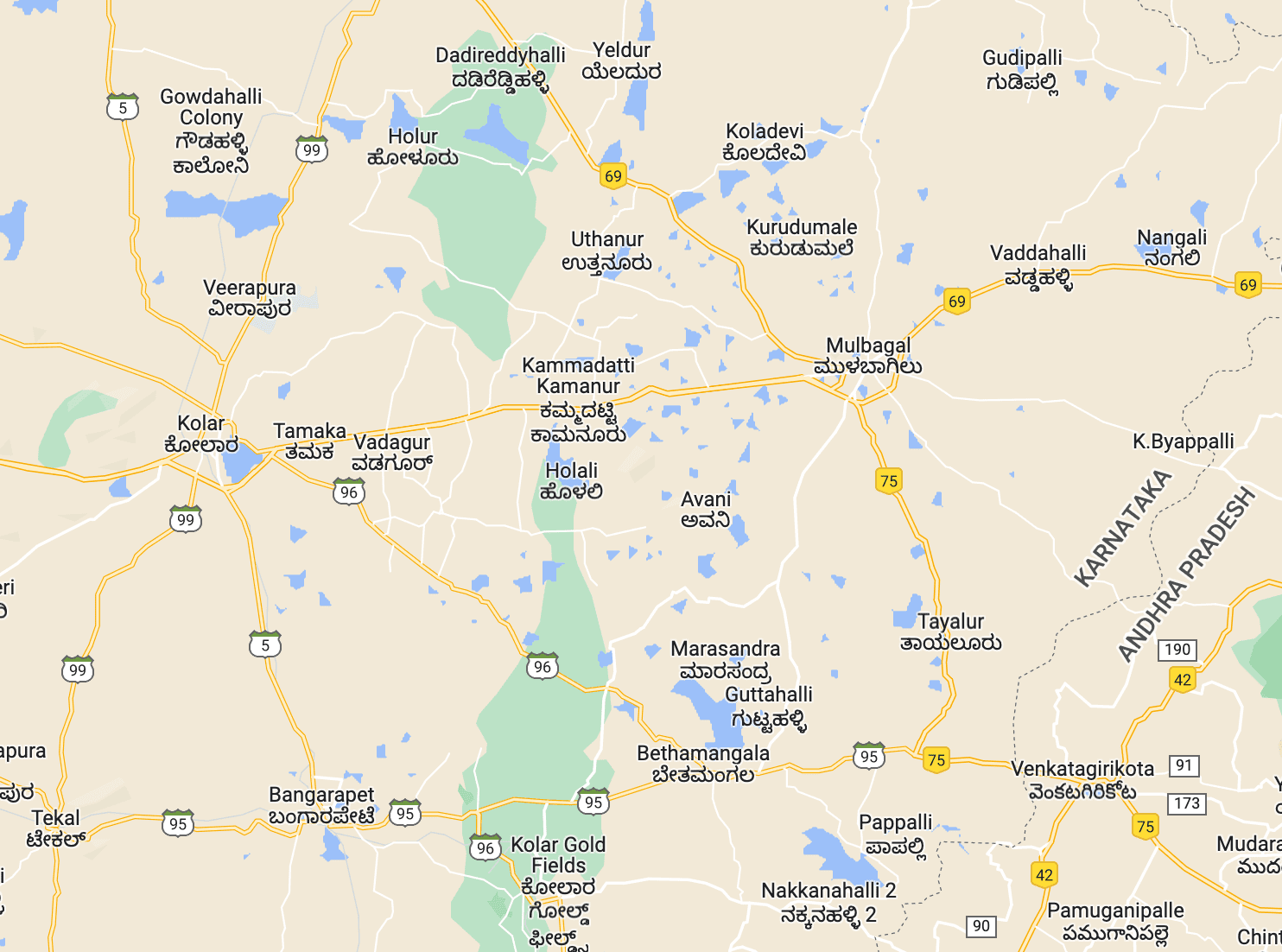 I reached the first lake at 8:30 am. This was close to Mulbagal. The weather was pleasant, a few degrees below what we would find in Bangalore. It was dried out last year and all the fish caught (through a programme run by the government). The lake had silted along the edges, but the center still held water. The water was a problem for desilting, but the locals had it all planned out. 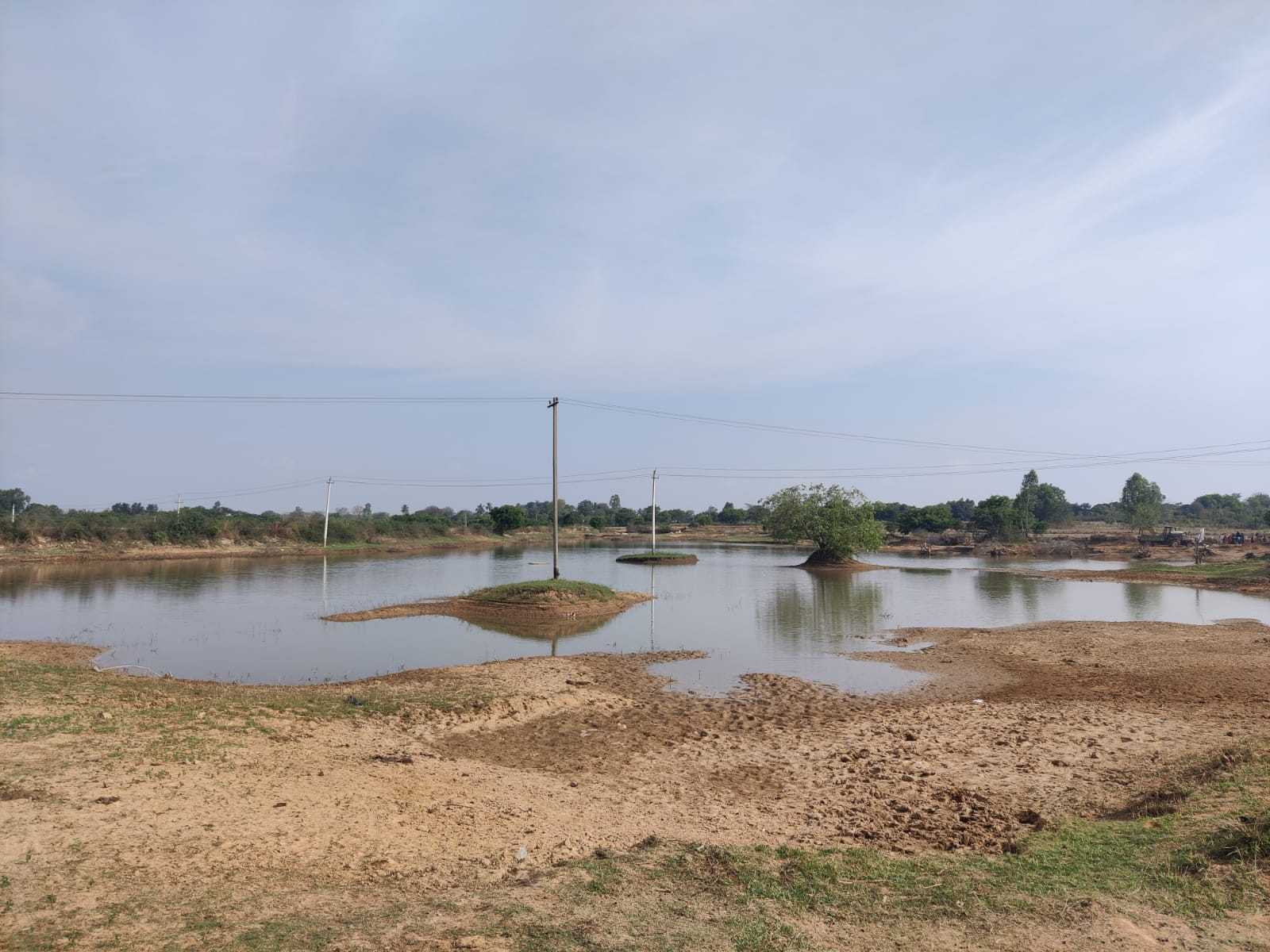 There was a pooja going on. Every big activity must start with a pooja. The priest kept adding tidbits of general knowledge along with conducting the pooja. One thing he told was that silt excavation was once the job of kings. By doing this, we are performing the king's duty. That's an interesting thought, But who are the "we" doing the king's duty here? 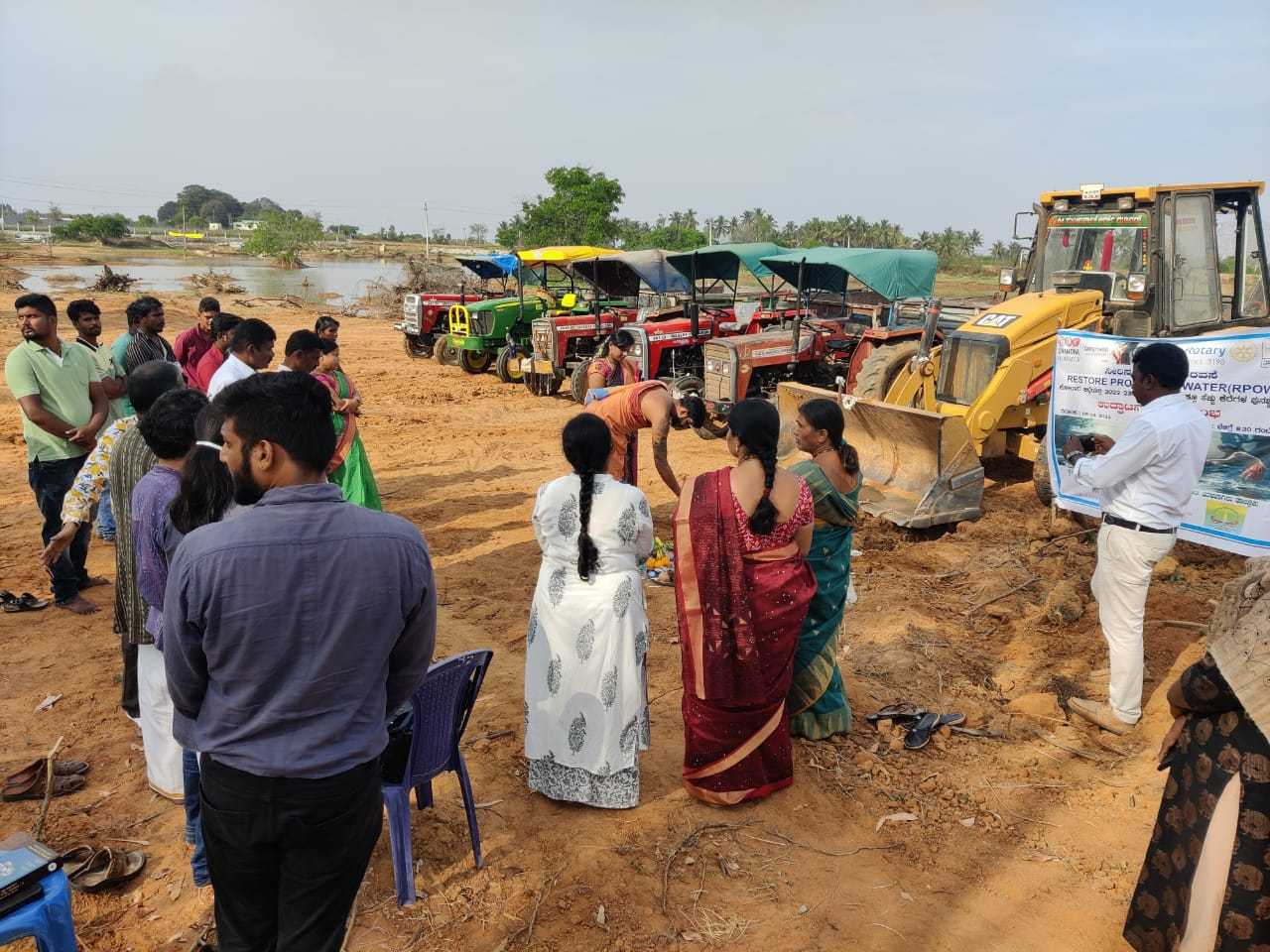 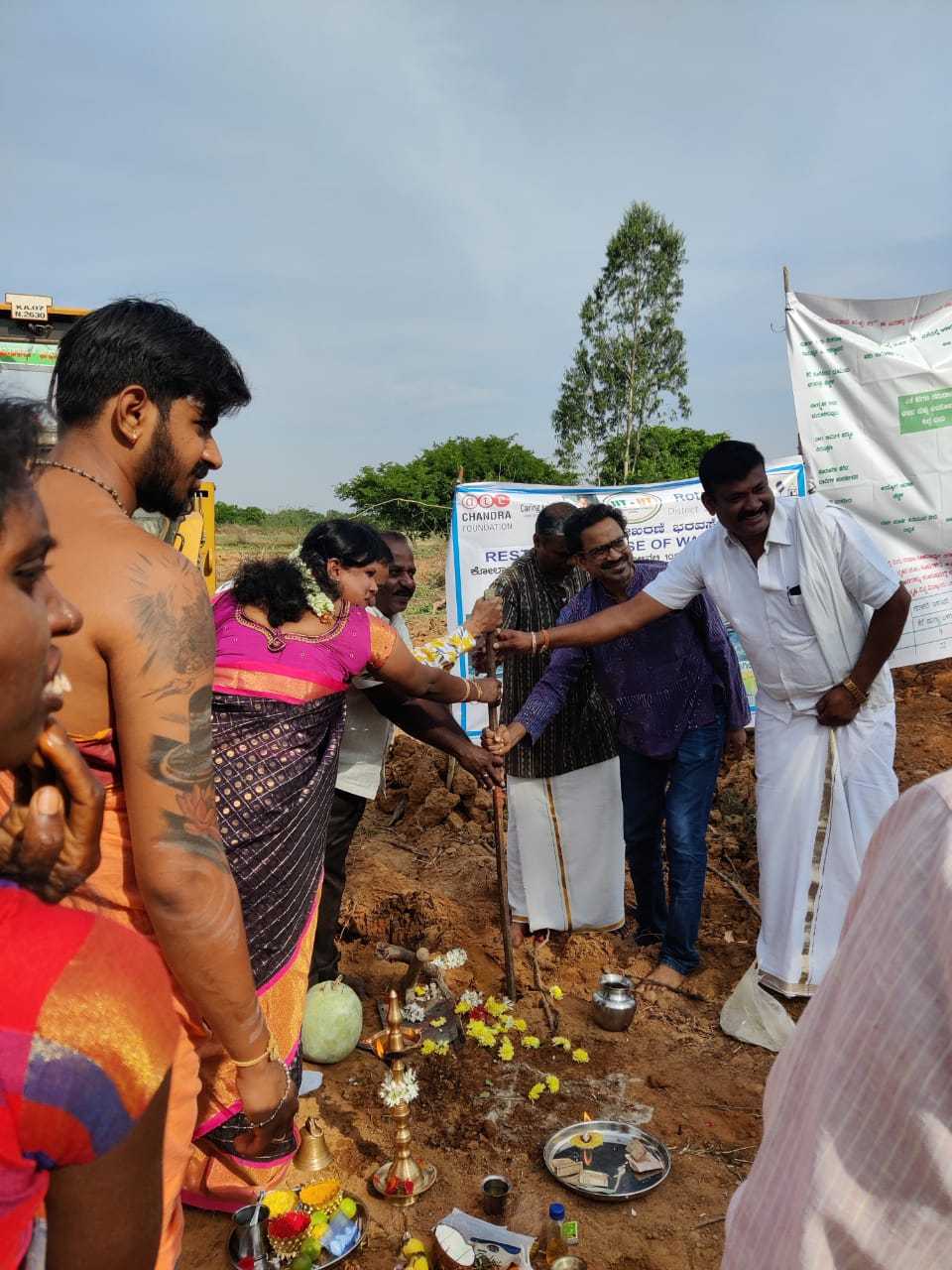 Several people and activities have to come together to make this desilting operation in the Mulbagal lake happen. First, we need to establish the demand for silt. The local NGO (Grama Vikas in this case) worked with the gram panchayat and local villagers to establish this. They got a nod from the Gram Panchayat, and found enough farmers who agreed to cart silt once operations start. This is called the demand generation process within the programme.

After Grama Vikas was convinced of demand around the lake, they reached out to IIT-IIT - the glue that connects donors and the field NGO. Rotary club agreed to fund the operation. IIT-IIT would also provide technical support in the form of processes that help run the programme. Not that Grama Vikas would need much of technical support. They have done this in about 15 lakes around the Kolar area the previous year. There's a lake right in front of their office that was rejuvenated a few years ago, and is now being preserved by Grama Vikas. It looks beautiful. 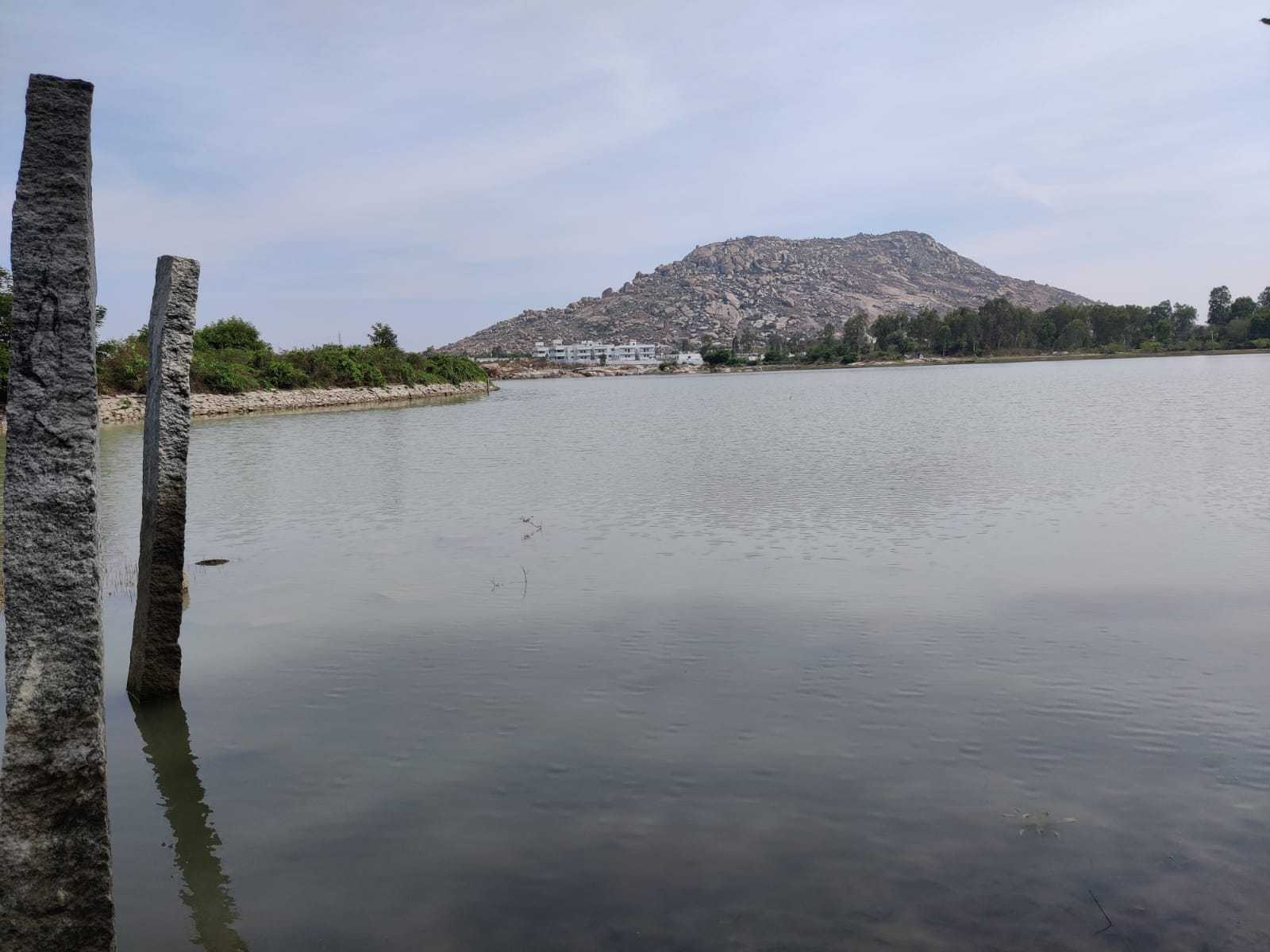 Once the pooja is over, people from Grama Vikas give some speeches where they explain the programme, and encourage locals to find more people to make it a success. We then proceed looking at the lake and talking. It is not as hot as Bangalore, but we are still spoiled with tender coconut juice at the banks of the lake. As I sip the tender coconut juice, I keep thinking how such a programme starts.

The first steps of the desilting process is to take pre-measurements. A pre-perspective image is taken. This is a photo of the lake taken from a specific location at a certain zoom level. Once the desilting process is over, another photo of the lake is taken from the same location at the same zoom level. This gives a good idea of the work performed. When rains come, it is hard to ensure that work is done. These pictures help understand the impact better. Site markings are also done to identify the area where desilting is to be performed. 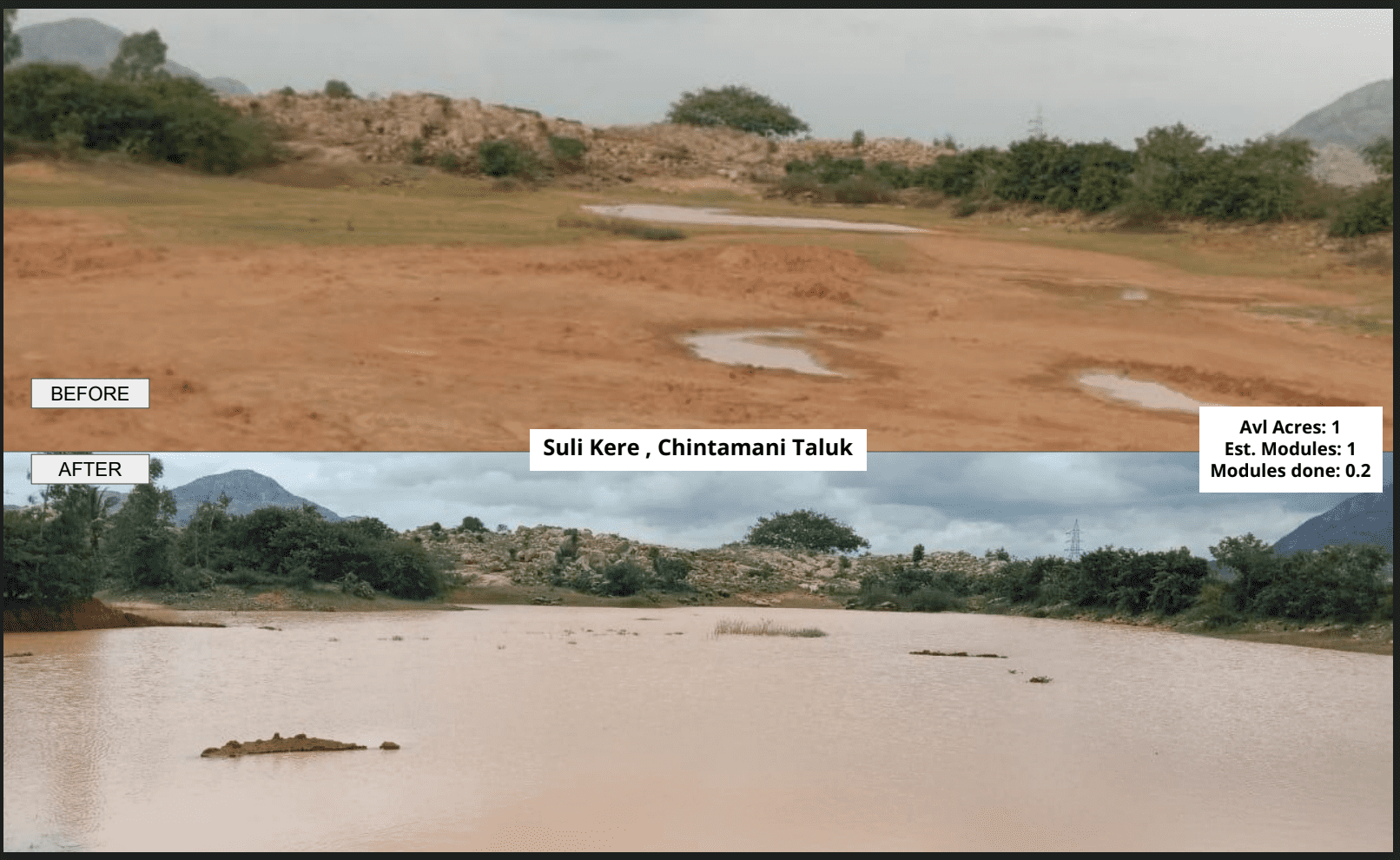 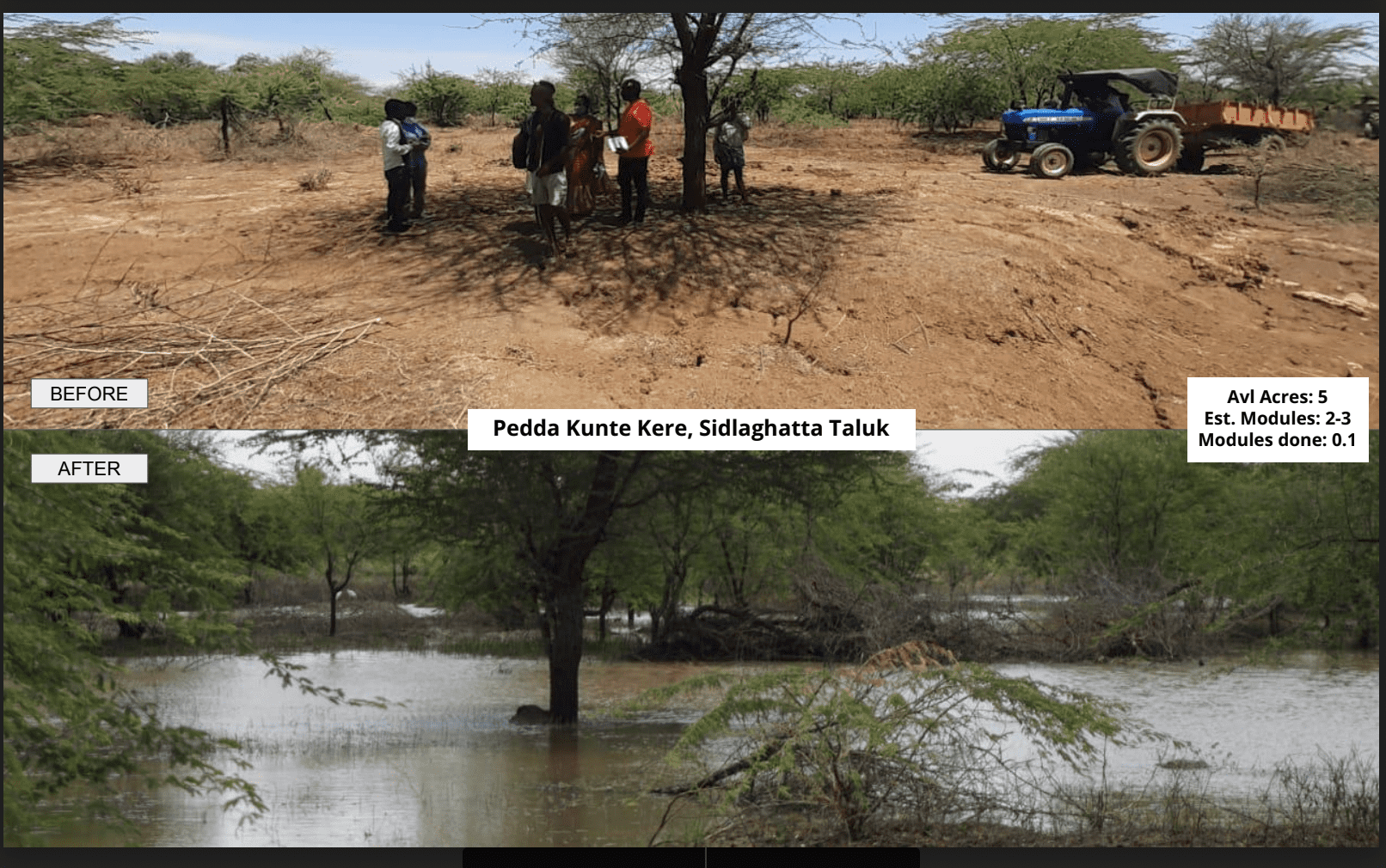 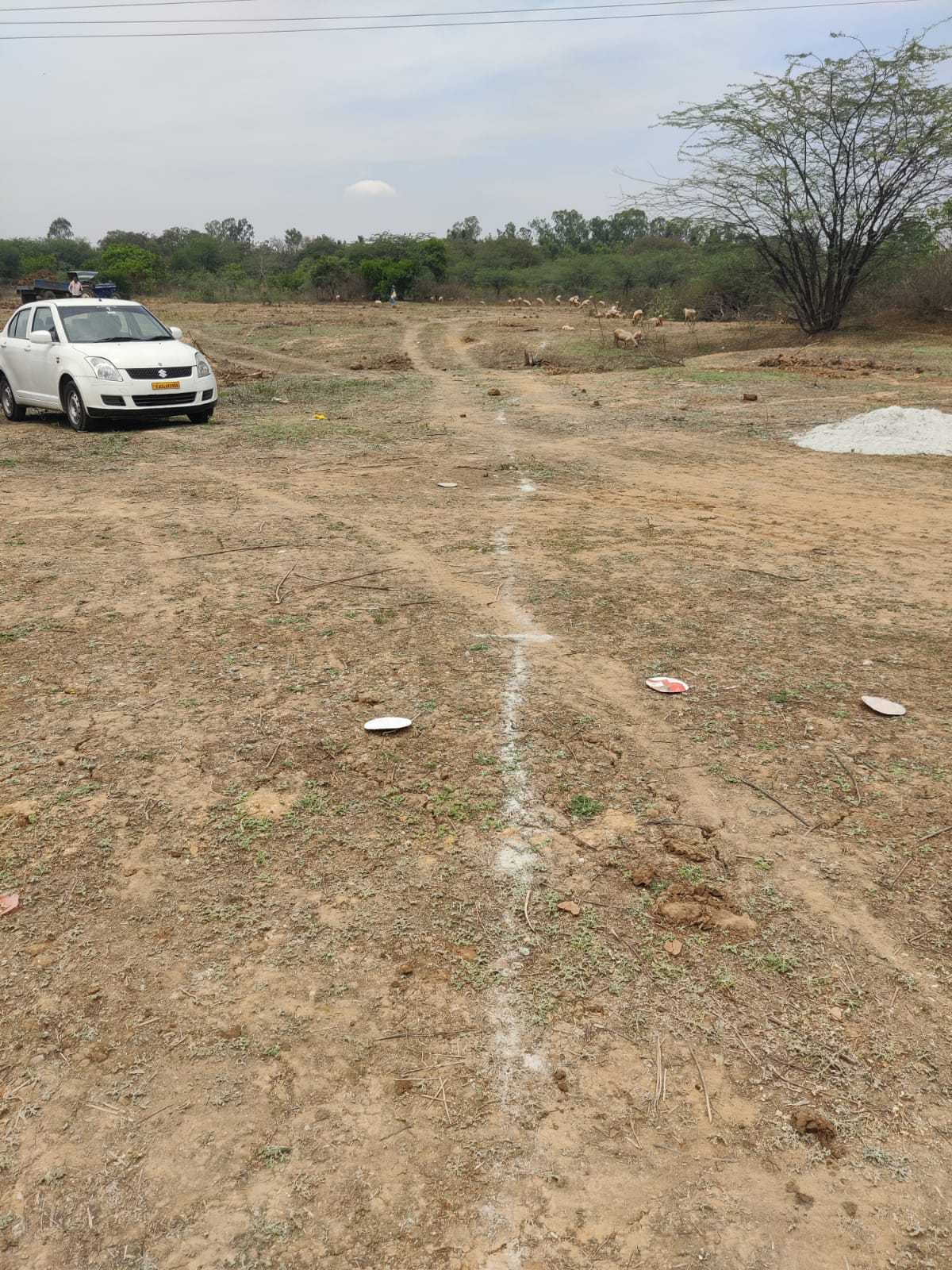 After the tender coconut, we proceed to Grama Vikas for breakfast. In case you have not been there, the dosas are excellent. They also make nice pickles. I purchased a pack of ginger chutney that was served during breakfast. It was yummy.

While we were busy with breakfast, desilting is in full progress at the site. Excavators lift silt and fill up tractors. Farmers cart them to their field. The farmers also contribute to the cost of excavators through a token amount per load (that is different at different locations). A tractor costs between Rs. 3000 and Rs. 4000 per day in rent and driver fees in this area. There is a lot of tomato, vegetable and ragi cultivation close to the lake, making it easier to find farmers willing to cart silt.

I got to meet the supervisor for the Mulbagal lake, and folks at the Grama Vikas office. They showed me the log book used by supervisors to enter daily recording of silt excavation and carting. The book is exactly like the forms in Avni. It gets bright and hot during the day at the lake, which means using cell phones is hard. Entry into the phone happens when the supervisors get back to office after the field work. It is then approved by Grama Vikas staff.

Breakfast is over, and we proceed to the next lake, which is on the way back from Kolar to Bangalore. When we reached the spot, excavators were humming along and tractors carried stuff up and down in a practiced rhythm. There was just one thing missing - water. It was hard to imagine that this is really a lake. No wonder we need local NGOs to identify lakes for us. Uninitiated people like me would not be able to spot it this easily. 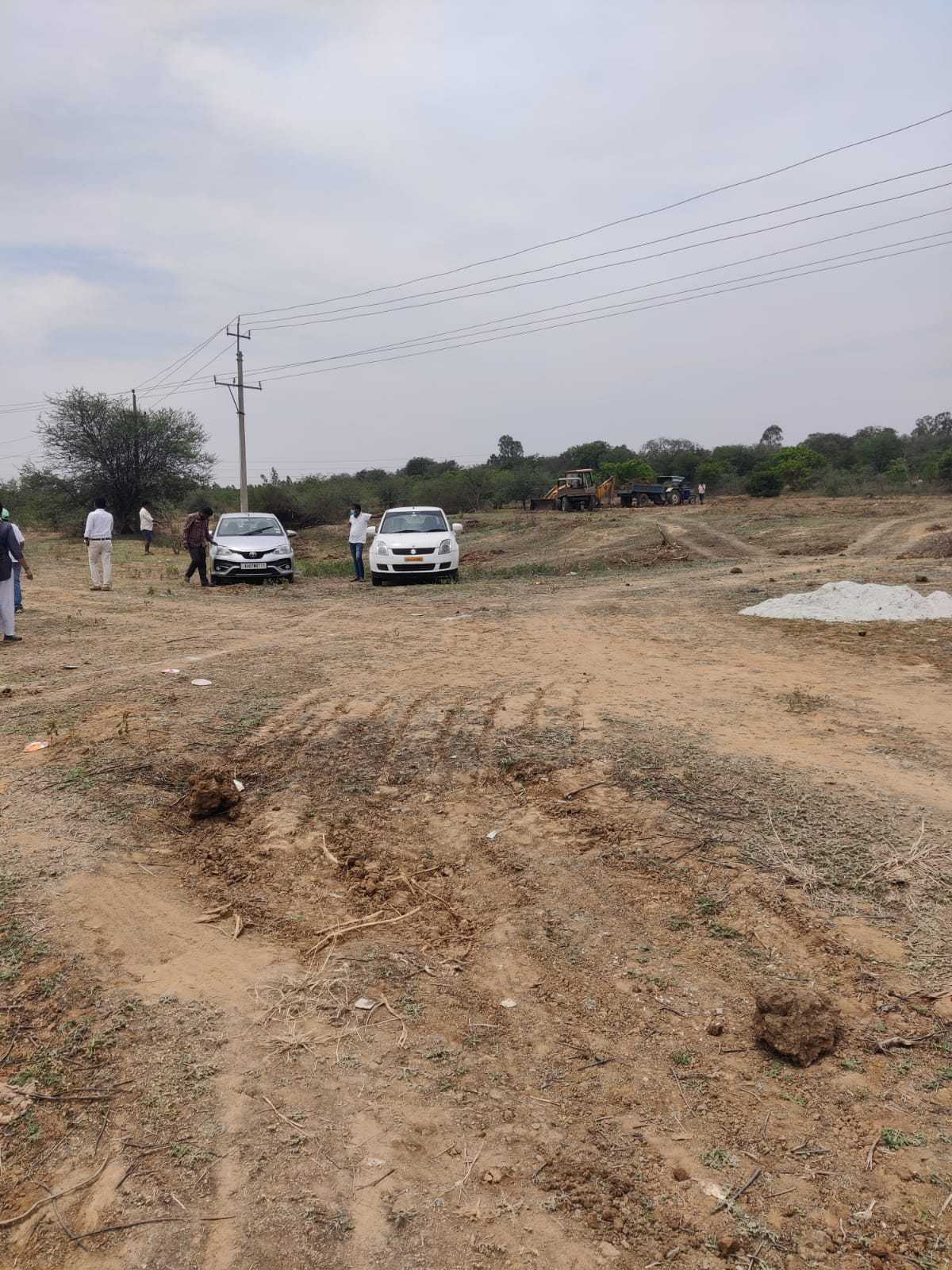 In fact, there were clues to indicate these were really lakes. There was a culvert close by. Naveen (who is part of the project management team for the programme) showed me some plants that exclusively grow along the shore of lakes. 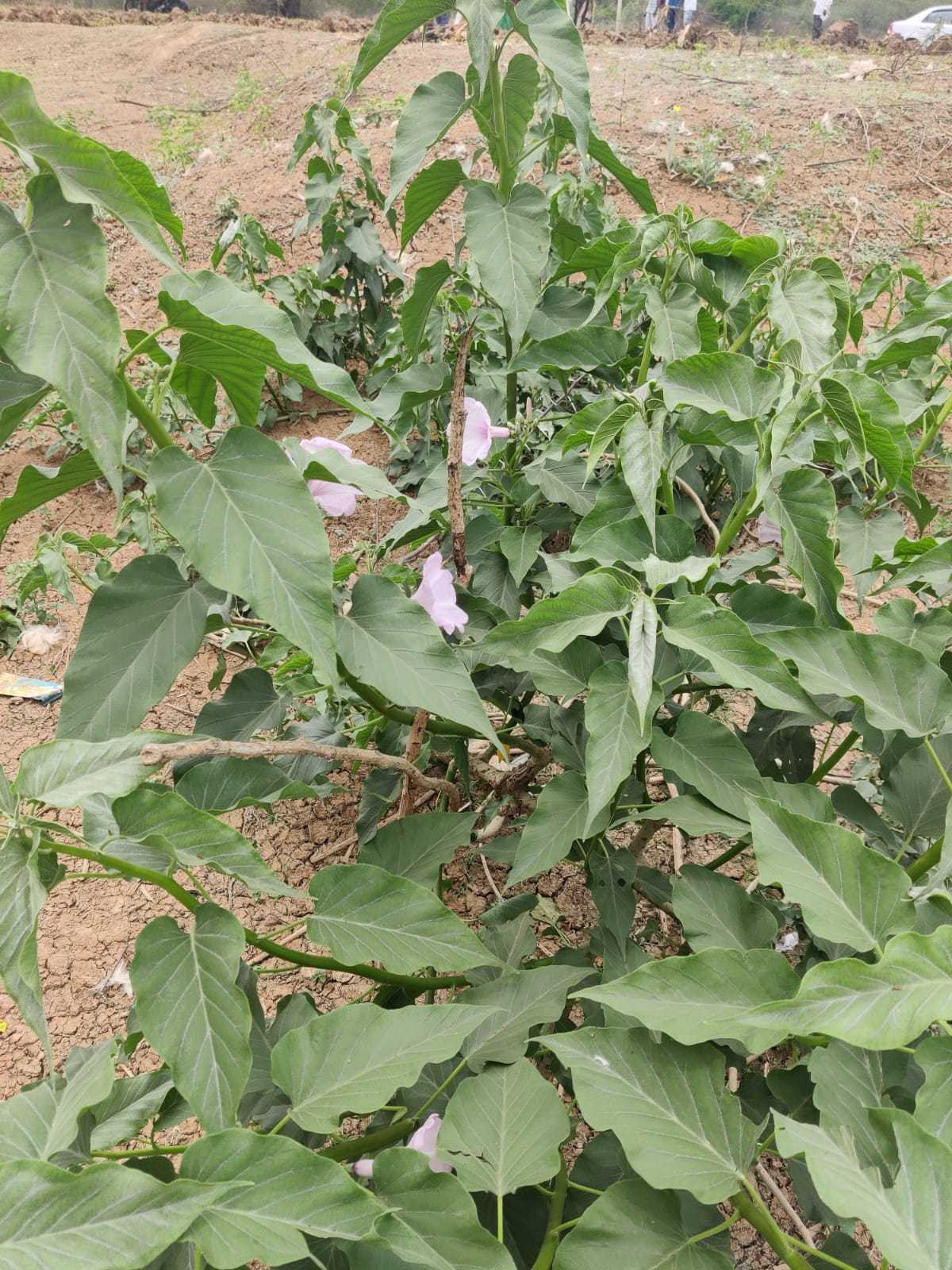 He also pointed me to a bunch of trees that are really weeds. Can you imagine a tree like that can grow to this size in a timespan of 9 months? 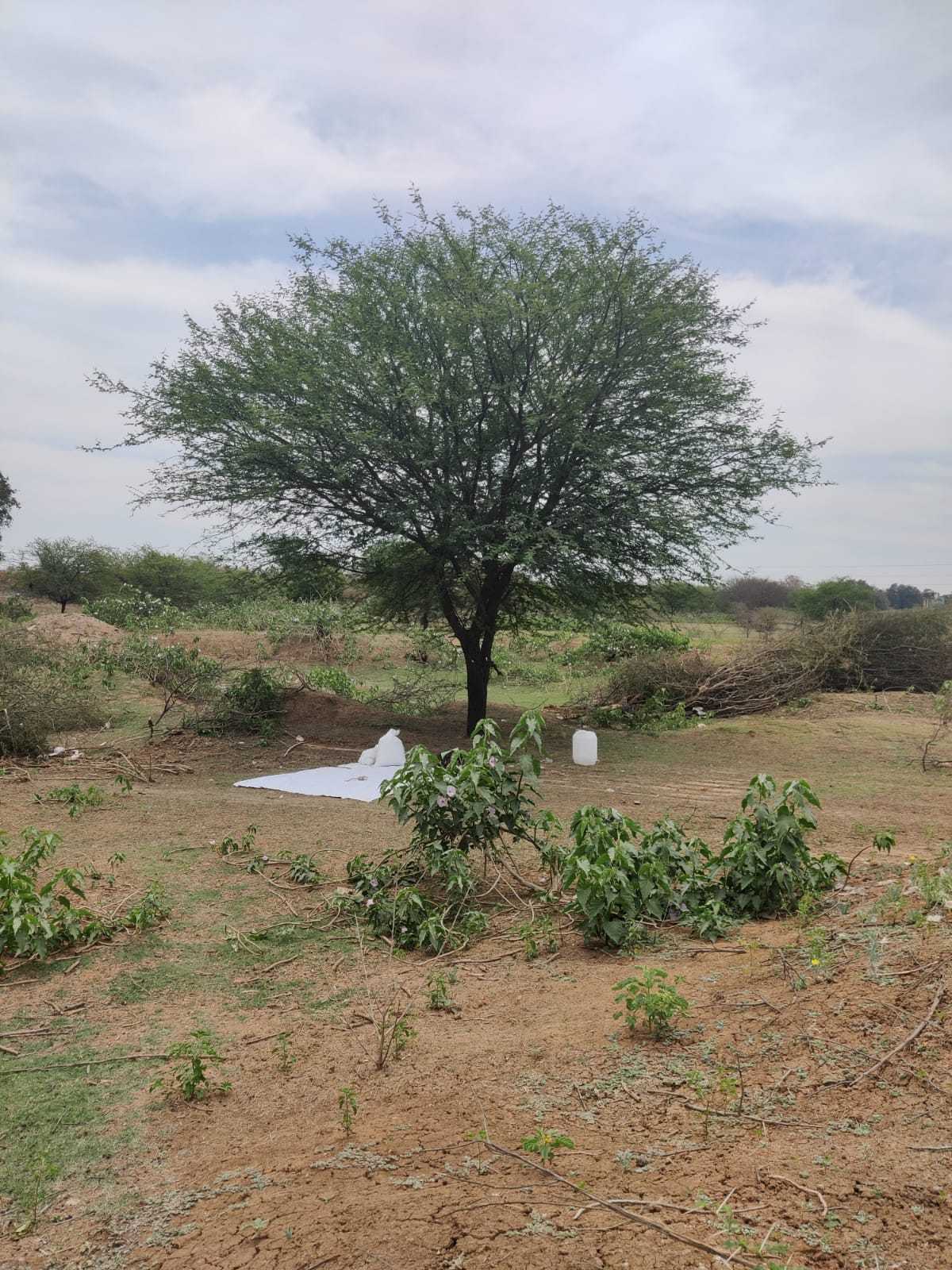 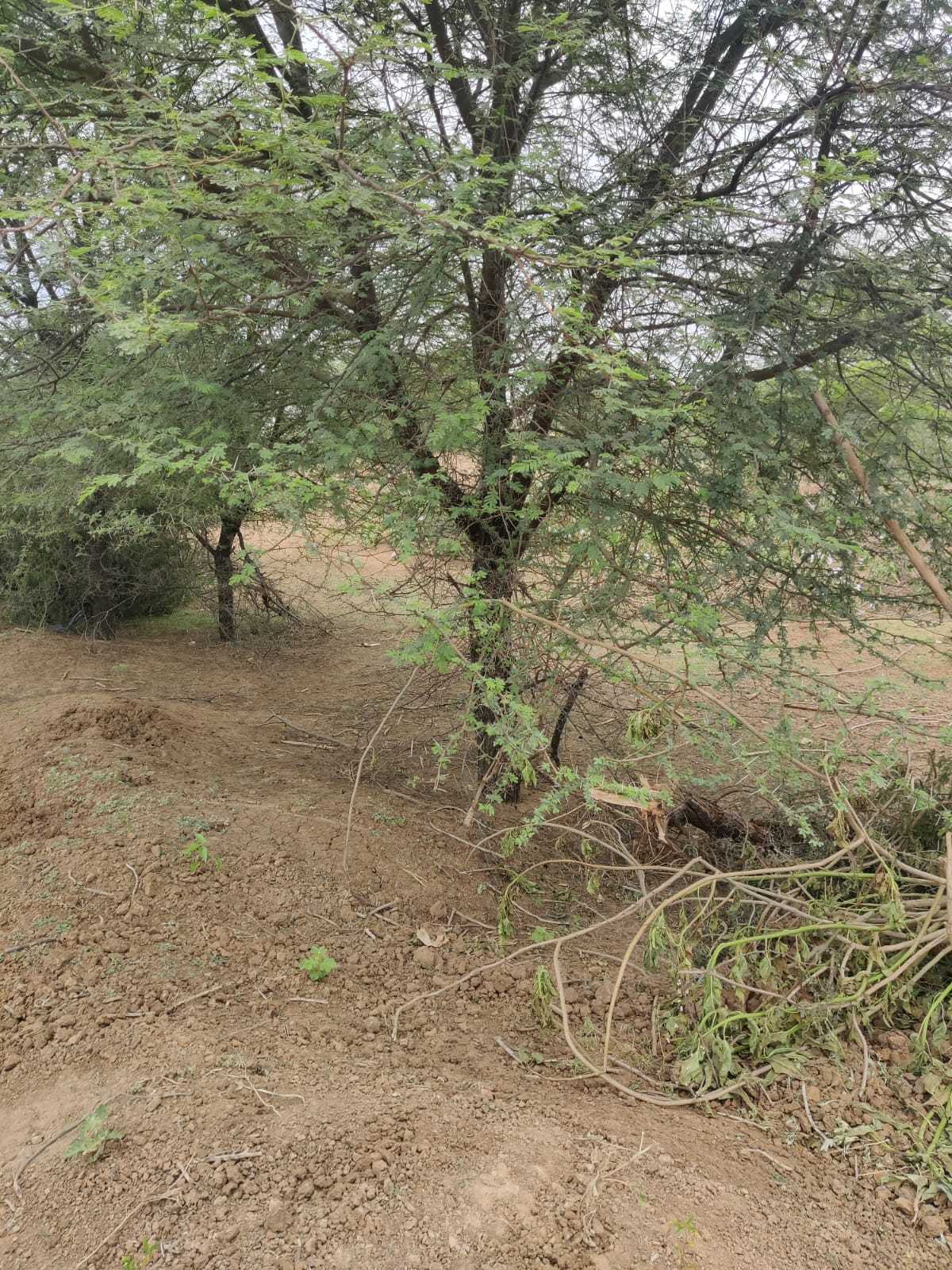 This lake was about 77 acres in size. The objective is to increase the depth by 1.5 metres in as much part of the lake as possible. Since the lake is dry, work starts from the center and progresses outwards. This would not have been possible in the first lake where they had to go outside-in until it is no longer possible to desilt. 1.5 metres is two scoops. By the end, about 460,000 cubic metres of silt would have been carted from this one lake. That is space for 460 million litres of water!

Of course, not all of this will be done this year. Typically desilting happens in modules (where a module is 10,000 cubic metres). The number of modules planned for a lake depends on the number generated during the demand generation process.

We have another round of tender coconut, talk about the efficiency of excavators, the style of farming in the area, and the questions from potential new CSR partners and others who want to try a hand at desilting in their own areas. And then we bid good bye and go back home.

On the way back, I attempted to climb a short hill. On the way, I had to go through a lake. I kept looking at the side, and found the same plant that was there at the second lake. 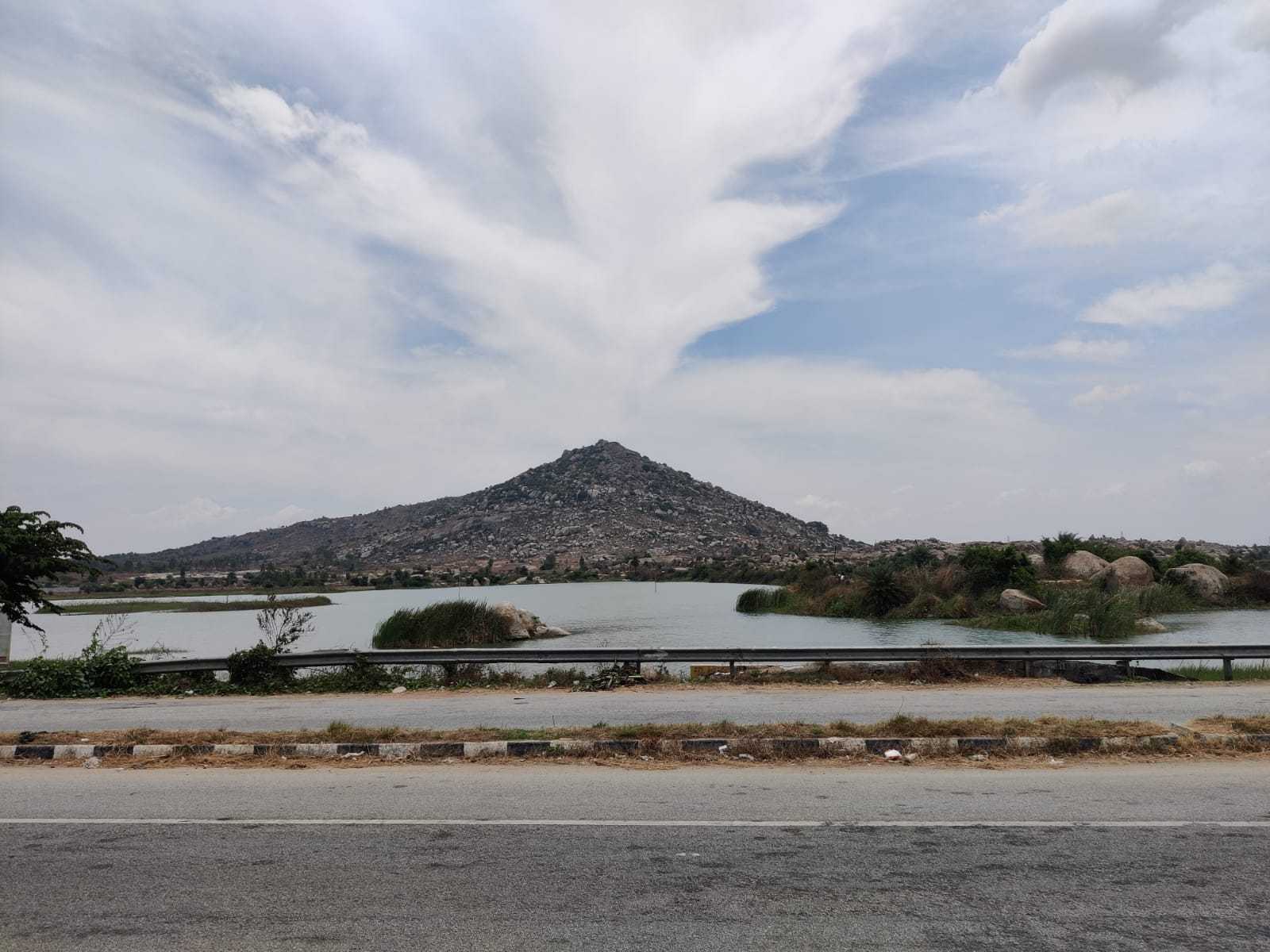 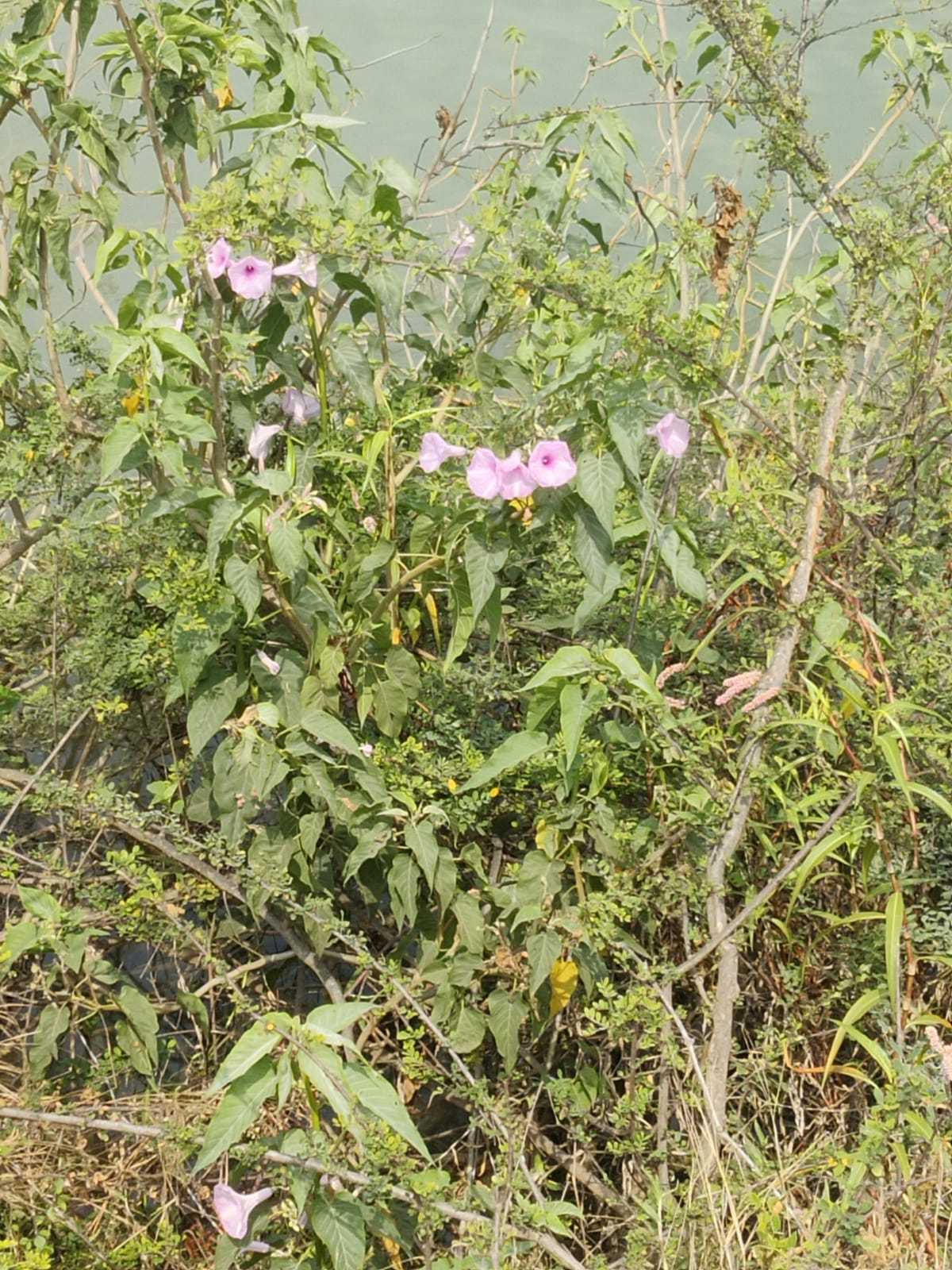